A record rise in women’s full-time employment opportunities has boosted the UK’s employment rates to a record high of 76.3% in the September to November 2019 period (up 0.5% from the previous quarter and 0.6% higher than the year before).

The Office for National Statistics (ONS) have released their findings for the previous quarter which show that 126,000 more women worked in a full-time role compared to the previous quarter, meaning that a record 32.9 million are currently employed in the UK.

Over two-thirds of this growth has been attributed in the past year from women working full time, says ONS head of labour market and households, David Freeman.

The statistics go on to breakdown that the estimated employment rate for men was 80.4%, a 0.1% increase on the year. Similarly, women across the board increased on last year but we can see a massive 1.1% increase comparatively, meaning employment rates for women are now at 72.3%.

The increase in women’s employment can be attributed to a couple of notable factors. Partly, it is a result of the changes we have seen to the state pension age for women, resulting in fewer women retiring before the age of 65. Also, there is a decrease in women being economically inactive. Economic inactivity measure people without a job who are not seeking work so are not unemployed. For example, looking after family or the home. 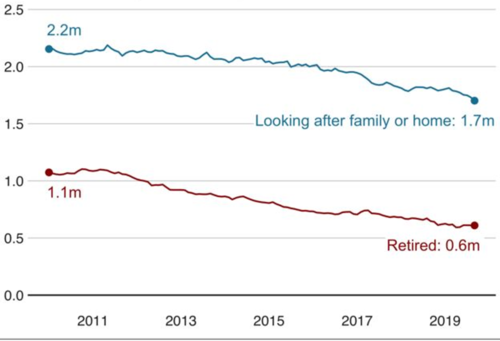 Generally speaking, since records began in 1971, economic inactivity has been steadily falling, this tends to be largely due to the rates falling with women.

The ONS goes on to show that in the previous quarter (September – November 2019), the estimated inactivity was at a record low of 20.6%. Men were unchanged from the year previous, but astoundingly women hit a new record low of 24.9%; 0.8% lower than the year before.

Unemployment is one of the closely-watched metrics that guide the Bank of England in deciding whether to raise or lower interest rates and will be taken into great consideration by the Monetary Policy Committee and their review of cutting the Official Interest rate next week to 0.05%.

To view the latest opportunities at Pro-Tax click here, or for a confidential discussion contact Rebecca English on 020 7269 6320 or rebecca.english@pro-tax.co.uk.