At Pro-Tax, we are keen to keep you abreast of all the latest insights and news affecting the sector. We are proud to be working in Partnership with the ABI to host a breakfast event covering topics across insurance tax and the upcoming challenges the sector faces in 2020. In this guest article, David Jordorson of the ABI shares his thoughts on leaving the EU.

And thus after 47 years’ membership the UK leaves the European Union, in an atmosphere strangely muted for 11pm on a Friday night at the end of dry January. Given little will change until 31 December, a feeling of anti-climax after such seismic change is probably inevitable.

Now the UK is free to seize the opportunities afforded by Brexit, from which a distant observer of the process might assume the UK economy is dominated by fishing and farming. ”O brave new world, that has such people in it!” Whether Shakespeare had Dominic Cummings in mind has not been established to a certainty.

The business pages are filled with speculation about the impact on the UK economy at a time filled with change – with a new PM, a new Chancellor and shortly a new governor at the Bank of England. Given the government’s unaccustomed majority, the sense is of a sudden freedom of choice, although the new administration has social and economic promises to keep.

There are no immediate tax changes caused by Brexit – VAT rules for goods and services alike remain the same (see below), and even the jurisdiction of the CJEU remains intact for this calendar year. The negotiations regarding the future trade relationship start in March, but the government hopes to move the conversation on and relegate Europe to the back pages. By that time, some big decisions in the PM’s in-tray on his arrival may have been taken, though the consequences will not be apparent for some time.

With a Budget almost exactly two months after the election and less than six weeks after Brexit, the Chancellor is likely to do little more on 11 March (tbc) than set the tone and produce some quick fixes, tax giveaways being limited at this point to a NI threshold increase (loose campaign talk of bigger plans shelved for now). The ABI is asking for a cut in the IPT standard rate as part of its ongoing campaign against increases. We expect a Spending Review in the Summer and perhaps an Autumn Budget to prepare for the post-transition period. A roadmap for the years ahead would be welcome.

HMRC announced on 31 January that new VAT regulations had been introduced, effective that day, to enable the current VAT recovery position for UK supplies of financial services to remain exempt with no input tax recovery. (Had this housekeeping not been done, financial services within the UK would have become effectively zero rated by virtue of being supplied to a non-EU territory). How the UK proposes to treat the supply of financial services to the EU after the transitional period remains uncertain – but the logical basis for distinguishing between EU countries and others is not clear.

Making a busy day of it, the OECD announced on Friday 31 January that the Inclusive Framework of 137 member countries had affirmed their commitment to reach an agreement by the end of 2020. This was accompanied by a Statement setting out further details of Pillar 1 and an update on Pillar 2.

This and other tax issues for 2020 will be discussed at the ABI/Pro-Tax breakfast event on 31 March – this event is free and early registration is therefore encouraged. 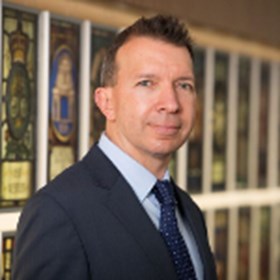 This article was written by David Jordorson of the ABI.

David is a member of the tax team within the prudential regulation directorate with responsibility for indirect taxes in relation to life and general insurance companies and the taxation of insurance products.

He joined the ABI in 2015 having previously been Head of VAT at the Marsh & McLennan Companies group (MMC).  He also worked on insurance and financial services at KPMG, Coopers & Lybrand and the Royal Bank of Scotland. He started his career at HM Revenue & Customs, having studied English & European Literature at Warwick University.

For more information about the event, the ABI or how Pro-Tax can help with your recruiting needs, contact Jay Sky on 020 7269 6343 or email jay.sky@pro-tax.co.uk

This website uses cookies to improve your experience while you navigate through the website. Out of these cookies, the cookies that are categorized as necessary are stored on your browser as they are essential for the working of basic functionalities of the website. We also use third-party cookies that help us analyze and understand how you use this website. These cookies will be stored in your browser only with your consent. You also have the option to opt-out of these cookies. But opting out of some of these cookies may have an effect on your browsing experience.
Necessary Always Enabled
Necessary cookies are absolutely essential for the website to function properly. This category only includes cookies that ensures basic functionalities and security features of the website. These cookies do not store any personal information.
Non-necessary
Any cookies that may not be particularly necessary for the website to function and is used specifically to collect user personal data via analytics, ads, other embedded contents are termed as non-necessary cookies. It is mandatory to procure user consent prior to running these cookies on your website.
SAVE & ACCEPT